Jungle Unchained was a series of jungle/drum and bass music parties that I led and organized for 5 volumes. It was held at the AKK, a non-profit, completely student-organized association for culture and communication of the KIT Karlsruhe. Everyone involved served the public good, a concept that the AKK has run successfully since its founding in 1977. The party was also co-organized by my good friends from Jungle Jungle in Barcelona, and, hence, promoted as a satellite party for Jungle Jungle in Germany.

The parties were always free entry and ran from 20:00 or 21:00 to 05:00 the next morning, which was the maximum time allowed at the venue. Drinks in the AKK are always cheap, as it functions as non-profit student bar (double whammy!). So, provided that we got good music coming into town, we were sure to fill the house – and fill the house we did! Come winter or summer, during peak hours from 00:00 to 03:00 the place was packed! The crowd was always friendly and peaceful, the vibes were good and everyone actively involved generally left with a smile on their face. Sure, cleaning up from 05:00 to 09:00 was usually the less fun part of the experience, but, again, being non-profit with everyone volunteering in the whole of the AKK, everyone involved was required to help – and this was a good thing!

The first volume of Jungle Unchained was created out of the desire to bring good jungle and drum and bass music to Karlsruhe and organize a party by friends for friends: for the love of jungle and drum and bass! Together with Jungle Jungle I already had celebrated my birthday in Barcelona once and I was determined to repeat the wonderful experience in Germany:

Luckily, we were able to negotiate the budget with the AKK so we could fly everyone from Jungle Jungle to Karlsruhe! The first poster was created by Daniel Lindenkreuz. The theme of unleashing the jungle was depicted with an image of a gorilla bursting through jail bars. I want to include it here for completeness sake:

The only printouts were hung around the KIT campus and flyers were distributed for a few days. We did not expect much and were just looking forward to a great party. Stepherd, a good friend of Tobias Walter, who was also in the organization team, came down from Freiberg. Our friends Christian Claus, aka 2xC, and Marnin Jahnke, aka Thønderdrøn, who was also involved in the organizational team, rounded the party off, together with cappel:nord on the visuals.

Originally, it was planned to be a one off party, but the party went so well that the people from the AKK started talking to us. Suddenly we had to come up with new artists and keep the interest in the party up. Together with Michael Kapuste, aka K-Puste, we were able to organize local forerunners of the genre Illcoholic and Alex Reeve and we organized the Ganja Riddim Crew to start the party off with some traditional Dub before turning up the BPMs. We wanted to involve Jungle Jungle as well and from here on organized for one member from Barcelona to come to every subsequent party, Tamen leading the pack. Thønderdrøn finished it off for the second time!

The poster for the second volume was designed in cooperation between Daniel Lindenkreuz and me. To continue using jungle themes, we chose the parrot as the main motive for this party. I took it on me to polygonize the image. Originally I tried using free tools, but we quickly dismissed the idea as nothing looked convincing (the palms in the background were actually done this way... and, well, look at how low the quality of these algorithms is). Instead, I converted the whole animal using Photoshop's lasso-tool and average shortcut to draw a triangular selection at a time and average the area to create a polygon.

For the third party, we got Sekev to join us from Barcelona. With the help of Jungle Jungle, we organized Innerhaze from Berlin, who came with his friend Luis Killmetruck. Together, they played two sets: Dubstep at the start and Breakcore at the end. Stepherd came down from Freiberg again, and Ganja Riddim did a back-to-back 2h Dub set with Niller Records. Also MrFuzzy joined us as VJ for the first time and would stay until the last volume of the series.

The poster was done relatively quickly. We chose the lizard as our jungle animal and took a color bin shift effect. The design was largely kept similar to the second poster, exchanging plants for horns around the top. For the first time, we decided not to print a front and back for the flyers, but include all the information on one side, reducing printing costs for the AKK.

Organizing the fourth party has gotten routine by now. Egres from Jungle Jungle joined us this year and with the help of Tamen, we got hold of Grünkern who came down from Cologne. This party also had more local names: DJ D-Vine and Kyle Dubwyce, both from Karlsruhe and around, joined us for a wonderful party. Dubby, a good friend of ours from Stuttgart, who is also with Flying Dubmen, came to continue the traditional Dub start-off at the beginning.

The poster was done a little last minute and turned out quite elaborate. Originally, we wanted to include the spider this year. We had plans to photograph an origami spider made by SakiOrigami, but unfortunately the plan never worked out and we had little time left to make a poster and start the promotion.

I took the first idea we came up with: instead of using an animal, we decided to go with a plant theme, where the plant would free itself from the confines of the flower pot.

For the explosion, I fitted different photographs of broken ceramics and photoshopped clouds and a colorful explosion into it. The original photograph had the plant sitting on a wooden table, so I continued this theme and placed the information on wooden boards, making them look as if they were burned into it.

The most mature poster done for the party has to be the last one. Going into its organization I knew this was going to be the last Jungle Unchained I would spearhead and I wanted to leave with a bang. Apart from that, I also organized the event to be on my 30th birthday, which was an even bigger incentive to go full out. We got the whole Jungle Jungle crew to come again this time (excluding Tamen, who had left for Australia by then). Even more, I was able to negotiate getting two dear friends from other parts of Europe to Karlsruhe: Stellar Ink Pony, aka Procs, from Stockholm and Code, from Limerick! To keep the party personal, we re-invited our friends Thønderdrøn and 2xC to join us again.

This time, I had a clear idea of what I wanted the poster to be. First of all, the king of the jungle had to be the main motive. Looking stern and fierce at the viewer. I switched from wood to metal and merely with subtle touches of colored party lights, I was able to pull together a very harmonious composition.

What is left is to give some impressions of the party series. Unfortunately, we never took many photos and I personally only took a few videos. Here are a few shots courtesy of Tobias Grothmann:

A rare shot of the whole crew and friends after the very first party, thanks to Mareike Richter:

I want to leave the reader with a few short videos that document the party. Also, it is the only way to show the good atmosphere and crowd that was present in every event.

People in general had a good time and not dancing was hardly possible. Here we have Sekev killing it on the decks: 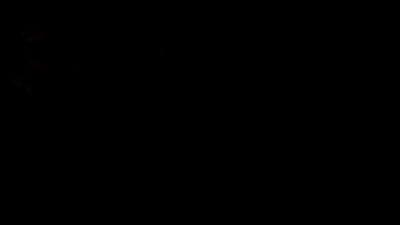 This last shot has the lights on. It was just past 05:00 in the morning and the DJs were spinning the last track while the final dance floor warriors were tired but still could not get enough. Innerhaze and Luis Killmetruck can be seen here giving everyone the appropriate farewell: 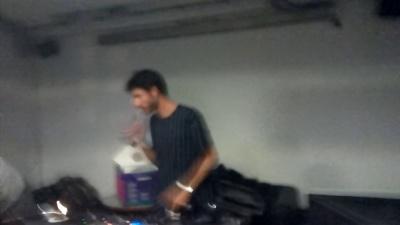 All in all, the whole experience was exceptionally wonderful. Thanks to the AKK, especially Jakob, Mäx, Pantos, Jonas, Pip, Daky, PA und Natalie! Thanks to the Jungle Unchained team: Tobias Grothmann, Marnin Jahnke, Daniel Lindenkreuz and Tobias Walter. Thanks to Jungle Jungle in Barcelona and to all the DJs that came to this party for the love of the music! Finally, thanks to all the guests who could not have been more pleasant to party with. For me, Jungle Unchained is now a closed book, but who knows what the future as an event manager will bring...