From 2010 to 2013 I partook in the Barcelona Laptop Orchestra (BLO) as a regular member and performer. BLO has existed since about 2008 under the leadership of Josep Comajuncosas. With BLO I was fortunate enough to be part of some important concerts, such as the Network Music Festival in Birmingham in 2012 and the Sonar Festival in Barcelona in both 2011 and 2013. It's mission was to further networked computer performance and interpretation of compositions, either written for or reinterpreted by a laptop orchestra. In it's own words:

The Barcelona Laptop Orchestra aims to become a meeting point for sound researchers, digital luthiers, performers and composers, focusing on the development of new music control interfaces and new paradigms for network performance, with laptops taking on a central, but not exclusive role.

One of the main compositions we mostly performed in that time was La Roda (cat. The Wheel). It was written by Josep Comajuncosas himself and consisted of a circular audio loop interlinking all performers, which would allow the next performer to record whatever the previous one was playing. Only one performer would be playing (sounding) at any given moment, while the next in the loop would record their output and prepare for their turn. When the previous performer finished their turn, the next performer would elaborate on the audio they just recorded by putting the audio recording through some type of audio processing. This processing algorithm could be anything, a simple reverb or a complex spectral effect, but it was built by each performer in coordination with Josep. It was important that each performer has a characteristic audio process that would distinguish them from the others.

As the sound would travel in circles through all performers over and over again, it would transform far beyond recognition from what the original had been. The main challenge of the composition would be to not simply have the sound go haywire each time, as the piece progresses. The conductor would try to give instructions on the direction to take the performance via network text messages appearing on each performers screen. Your job as a performer was to design your process to not only modify but also reduce the sound in a characteristic and novel way. Each performer had a speaker for playback, giving the performance a spatialised element as the sound traveled from performer to performer. Alternatively, we experimented with sending all audio to a central conductor computer, where all audio could be played through a single stereo system for the audience to hear. The central conductor computer could also control other parameters, like the length of time each performer would have to play during their turn. Like this, the conductor could speed up or slow down the circular motion through the Roda, for example.

As we all gained more experience with the performance of the composition, we started elaborating on it. For example, processing eventually got centralised on the conductor computer with performers only sending OSC messages instead of audio. This facilitated avoiding audio artifacts and errors, which would propagate as the sound went in circles through all performers. Later, this would also open up being able to reroute and reorganise the Roda during the performance without having to rewire any hardware. Sections where two performers were engaged in duets with each other were now possible and the conductor could decide who would be playing in which order on a whim. During the Sonar 2011 performance of La Roda we setup two groups of performers in different venues in Barcelona and created a network version of La Roda. First, two Rodas are created in each venue working as usual. The conductors of each venue could then pass audio between the Roda's creating an inter-Roda feedback.

Other notable performances of La Roda, that we're uploaded to the interwebs, are the afrementioned Network Music Festival and the performances at 2012's FIMU in Belfort. In both cases a modified version for laptop orchestra and live instrument is used. In the Birmingham case BLO member Carlos Vaquero played the traverse flute, while in Belfort we had a bassoon with us.

Apart from La Roda, BLO interpreted compositions by other composers, such as the famous In C by Terry Riley:

A compositon composed specifically for laptop orchestra was CliX ReduX by Canadian expat Glen Fraser in Barcelona. It consists of prerecorded snippets of the orchestra members saying the letters of the alphabet out loud and remixing them during the performance interperting text that is sent in the network within the orchestra:

One minor fame to claim is that I designed the tshirts with the BLO logo, used in many of the videos above and that the orchestra still uses to this day. The metronome has a special significance for the orchestra, as it was central in their very first compositon back in 2008. Also, it is a reference to György Ligeti, whose Poème Symphonique for 100 Metronomes influenced said first composition (naturally). 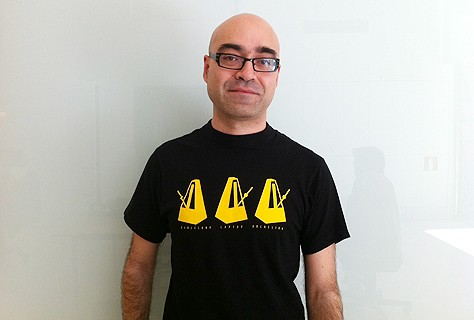 You can find the (somewhat outdated) website of the BLO here. Also, if you'd like to check out more videos, here is the BLO's YouTube channel.